Hurricane Harvey will likely be the most expensive natural disaster in US history, but there is another threat on the way. Tropical cyclone named Irma is moving from west coast of Africa toward North America and is still strengthening. Up to Tuesday Sept 5th it has reached maximum intensity of category 5 with sustained winds of 280 km/h making it the strongest hurricane in the Atlantic in a decade. Figure 1 shows forecast of Irma’s track by the National Hurricane Center for the next several days. According to this forecast, Irma is heading to Puerto Rico and adjacent islands. Computer models show the system is about to blast through the Caribbean and could also clip the US mainland during the next week. 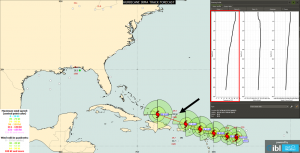 The environmental conditions are very favorable. Based on the figure 1 the sea surface temperature is 29.4 deg.C directly in the expected hurricane path and above all – the warm sea is very deep. Necessary water temperature for tropical cyclone development (26.5 deg.C) reaches incredible depth 95 m.

Irma is a classic “Cape Verde-type hurricane,” meaning it formed in the far eastern Atlantic, near the Cape Verde Islands, before tracking all the way across the Atlantic (figure 2). The Cape Verde storms frequently become some of the largest and most intense hurricanes.

Animation below shows both major hurricanes which has been formed over the last two weeks. There is hurricane Harvey over the Gulf of Mexico during the first days of animation and his persistent cloud system over the Texas and Lousiana. Later, during August 29th, poorly organized thunderstorms can be seen in close proximity of the African west coast and its next quick development as it moves to the west. The storm maintains its position over the sea warmer than 26.5 deg.C and out of the vertical wind shear stronger than 10 m/s which can subdue its development. Unfortunately, there is nothing to stop this hurricane so another disaster can be expected.